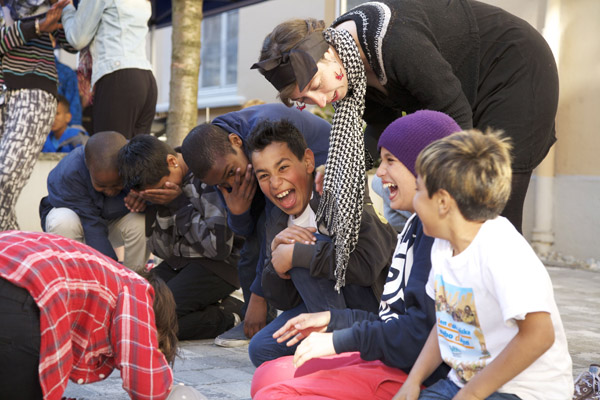 One to two classes at each school were chosen. Five art teachers from dance, theatre, visual arts and music participated from the cultural school. Our Street has its own Facebook page: https://www.facebook.com/V%C3%A5r-gate-206571566093984/ Objective: To use cultural differences as a resource through which to build on the students' own traditions, narratives and everyday lives. To build a bridge between the student's school day and the student's home and street life. To establish understanding among immigrant families about the value of their participation in the local community. To strengthen the multicultural community in class, at school and in the home environment. To show that each student's initiative can make a significant difference in their quality of life. Structure: We worked a total of 5 days at each school, one day per week. During the sixth week there was a performance, a carnival, a street party etc. At the end of each teaching day, there was an hour's meeting between educators and artists. Otherwise, the day was divided into groups in the individual subjects, with up to 12 students per group. Each group conducted 5 days with its art teacher and a teacher from the school partially present, alternating between two groups. In order to connect the students 'school day and project work to the home, an artist was also placed through the cultural forum in the municipality, who only worked with the pupils' immediate home environment. This had a crucial impact on the project. Method: The pupils' own experience and abilities were used as a starting point. We discovered these through "interviews" and conversations and by asking them to bring important items from home that they could talk about. Methods used were artistic and teachers received their course and introduction material in advance of teaching so that they could become familiar with the possibilities. The artists participated in meeting parents before the course started and presented themselves and their project plans. Art and artistic-social activities were used as ice breakers and bridge builders between people. An important inspiration for the work is Joseph Beuys, who defined art as the true productive force in society: "When a person takes the challenge seriously that every human being is an artist and applies it to his life, then one adds something to the world that has not existed previously. If we dare to start talking to each other, there one finds the substance. Then society begins differently. " Action learning as a method was used, without anyone actually knowing the term! Results: • Strengthened respect among fellow students. • Strengthened togetherness in the groups. • Strengthened the joy and understanding that each student has something to convey, something to share that has value for others. • Strengthened the students' understanding of and experience with their own creativity. • Several students performed for the first time on a stage or in a theatre they had made and several of them became local "stars" afterwards. • Educators experienced that it was possible to have open educational programmes where the project was able to unfold freely as opposed to the usual daily rigid frameworks. • Educators and artists spent much time together for reflection and agreed that this was central to the work. Caption: The picture is from Our Street's event on the European 'neighbours' day' at Mølenpris. Theater. Teacher and youth in the street in an improvisation situation / «community art». Leading up to this day, the artists worked 5 days with the students at school.